One of the most common complaints we get as council-members is about speeding in residential neighborhoods.

I had a meeting with a resident this morning to talk about one of these complaints, and I thought this was a good opportunity to discuss the city’s process for dealing with speeding complaints.

These complaints originate from many places such as calls to the police department or city hall, or conversations with residents at events or meetings.  I would encourage people to start the complaint process with their council member.  This allows us to monitor the process and make sure we know where problem areas are. We really like to know what goes on in our neighborhoods.

After the complaint is made, the city will deploy the traffic count device to the area.  You’ve seen it- it’s the thing with the two rubber tubes that go across the street.  This device will count all of the cars that go down the street and also track the speeds.  At the end we get reports like this one: 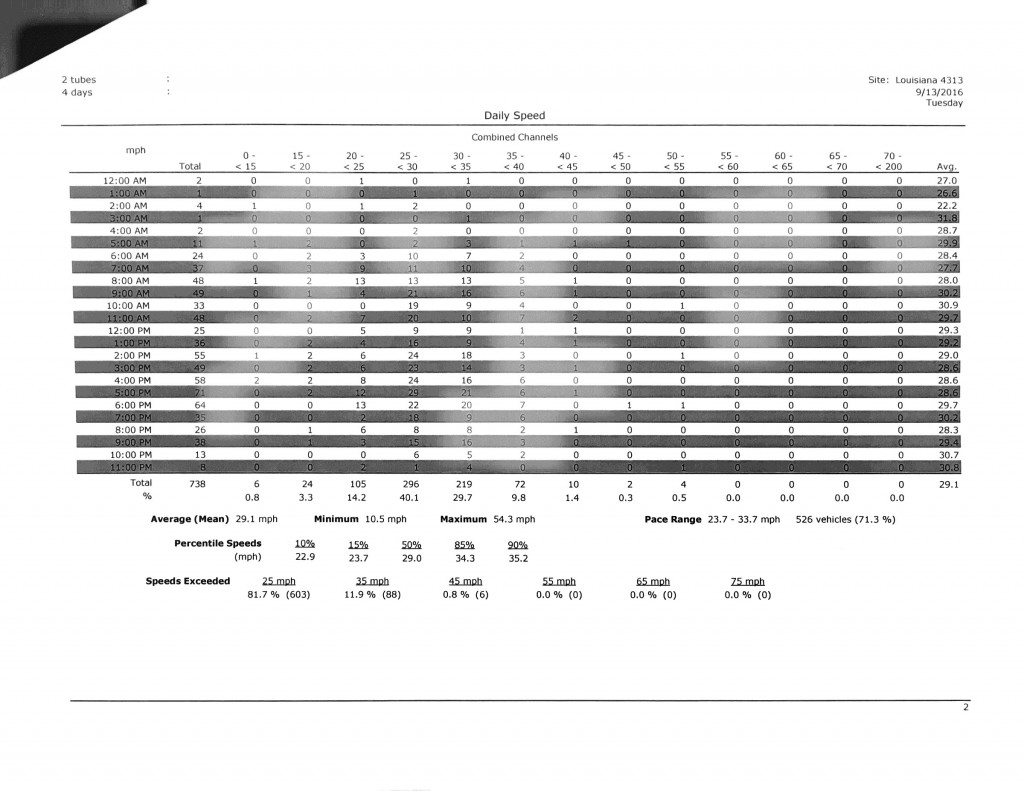 This allows us to see what the average speeds are, and if speeding is happening- when.

If there is a speed issue identified, and if the speeding fits into a pattern, the police department will institute targeted patrols to the area to help identify who is causing the speeding.

Most of the time when we get speed complaints the residents think it’s people cutting through the neighborhood that are doing the speeding.  Unfortunately, the real speeders are usually people who live in the neighborhood.

After the data is in the city will also look at making traffic control adjustments such as adding or removing signs, adding or removing pavement markings, or temporarily deploying the radar speed trailer (that sign that flashes when you go too fast).

How Long Does This Process Take?

Longer than you want it to but as quickly as possible.

The traffic counter is used for more things than responding to speeding complaints, and there are other things to consider when counting traffic (weather, time of year, school break, etc.) to make sure you get good numbers.

That’s great, but can’t I just get a stop sign?

I’ll admit that before I was on the council I didn’t understand this one. But after quite a bit of explaining and convincing and watching quite a bit of time-lapse traffic video, I begrudgingly understand… Stop signs don’t actually impact speed or improve safety the way you (or I) think they do.

When drivers perceive stop signs as “unnecessary” they either roll through them, or speed up after going through the intersection to “make up” the time that they “lost” by stopping.  (Yes, you know and I know that’s irrational. But we also drive around town to save a penny on gas even though we burn up more in gas by doing so.)

Stop signs can also create a false sense of security because people, especially kids, figure that if there’s a stop sign that cars will stop.  And that’s a bad assumption.

So, it’s not personal, and we’re not being cheap or mean by saying no to a stop sign request.  What we’re doing is trying to make the roads as safe as possible for everyone.

In Conclusion, the Necessary Disclaimer

This is obviously a high level overview and every situation is unique.

Again, if you have concerns with traffic or speeding, I encourage you to contact your councilmember (or if you don’t know who that is, contact me and I’ll get you to them).

Thanks for reading, and drive safely out there.

One thing I forgot to mention- the traffic tubes don’t work well in temperatures that are less than freezing.  So if requests are being made now, they may not get fulfilled until next spring, as there is already a queue of requests from this year.

9 thoughts on “Let’s Talk About Speeding”