Work sessions in August and September were relatively light on content as the focus was really on the budget process.

On September 1 we voted to set the preliminary budget for the city for 2016.  We set a number in September, and then we can’t raise the amount higher than that, but we can lower it.  The final number is set in December.

The preliminary budget we adopted keeps city services level to where they have been while providing for some basic increased budget pressures (like wages and health insurance).

I hope to be able to provide some more details about the budget soon, in an easy to understand format.

I don’t anticipate the bottom line number will change dramatically, but we may shift where some of the money is allocated to better fit our long term needs.

In the long term, I hope to be able to pursue a new approach to the budget process that is more transparent and easy to understand for everyone.  The process in use today, in my opinion, is too complicated, too time consuming for all involved, and isn’t structured in a way to get meaningful public feedback.

The City Code Task Force met for the third time and is really starting to gain momentum.  They will be presenting their first report to the council on October 1, and have already reviewed three chapters of the city code.

In The Community – Upcoming Events

A special note of congratulations to my colleague and friend Elizabeth Dahl on the birth of her daughter, Charlotte.

The next council meeting is October 6. 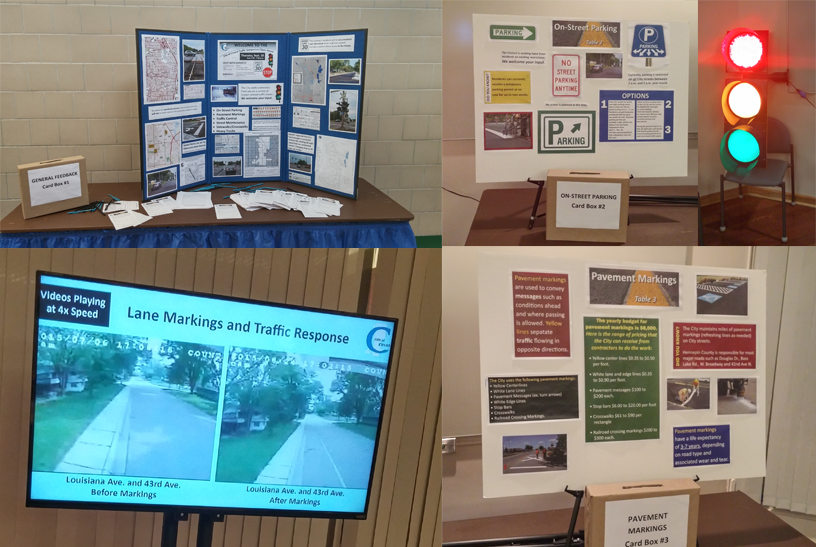 On September 10, 2015, the City of Crystal hosted our first Traffic Symposium.

The event was a part of the earlier announced Citizens Connection Initiative, and came about due to the high volume of concerns about traffic that council members receive.  The idea was to gather concerns citywide so we could develop a holistic approach to addressing traffic concerns in the city, rather than a piecemeal approach.

At the event there were several “stations” which covered different areas of the traffic system such as Street Maintenance, Signs, and Traffic Control devices.  Each station had a corresponding feedback sheet that allowed residents to give feedback about the specific topic.

There were also representatives from AAA, Metro Transit, and the A+ Driving School.  (The Driving school is who provided the “Drunk Goggles” I am wearing in this Sun Post article. I could not walk in a straight line while wearing them.)

The city staff also created two videos to help put traffic volumes in context, which were quite interesting.

At the city council work session this week, the council discussed that we would like to get the materials from the event online so that we can expand the amount of feedback we receive, and share the great materials with residents who were unable to attend.  The hope is we will be able to get the survey portion online so people can provide feedback with a few clicks.

I will post a link to those materials with a more detailed recap as soon as they are available.