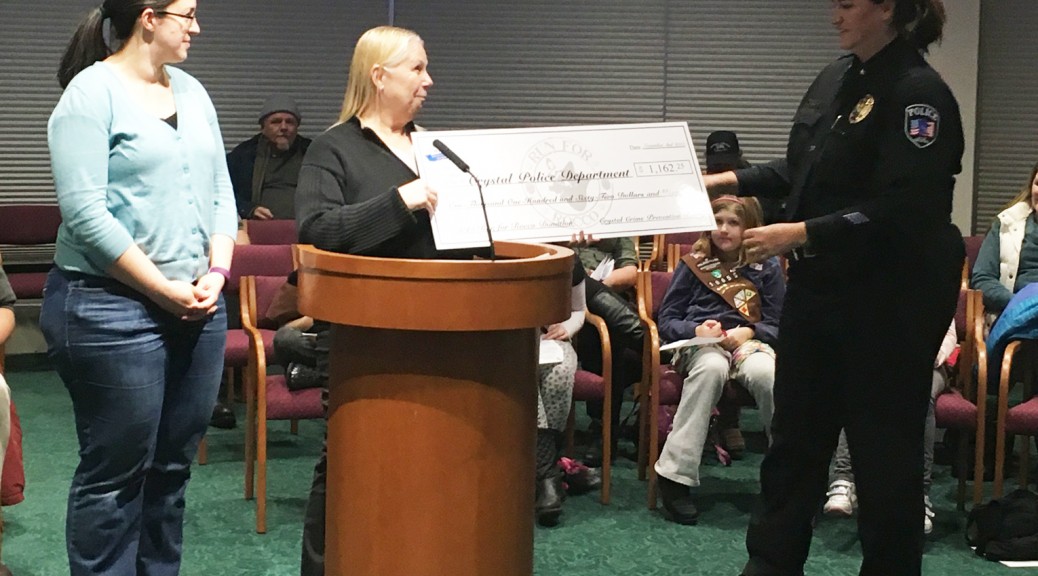 Well, here we are again.  I’m behind on my updates and staring at a daunting pile of paperwork to recap.  I’m not kidding. 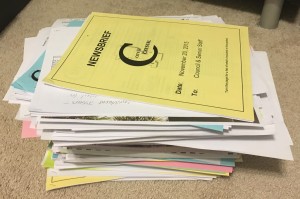 This is the pile of paperwork I have gathered since last time I wrote an update, just a few weeks ago.

People sometimes ask me if this job is what I expected, or what the biggest surprise was after getting elected – and I often point to the volume of paper that you get.  There’s just so much of it.  And 95% of it is must-read.  It’s rare that you get something you can just skip over.  Not complaining, just surprised.

Anyway, enough about my paper piles.  I will continue to play with the format of these updates, including the frequency and the content.  I’m sure that I’ll get the perfect system nailed down right about the time it’s time for me to hand off the (figurative) Ward 2 keys off to the next Ward 2 rep.

That is figurative, by the way.  Much to the disappointment of a friend’s kid who asked, I did not get a key to every lock in the city when I was elected.

On to the Update…

The big thing that happened over the last few weeks was the final vote on the city’s 2016 budget and tax levy, which happened on December 1.

There are several levies that make up your total tax bill.  The total property tax levy went up by just a hair under 3% (2.99%) over 2015, to around $9.6 million.  The total city budget is higher, because the city gets revenue from other places (like LGA, permit fees, etc.), but revenue from property taxes account for the largest percentage of the budget.

How the levy increase will affect you is another story.  I’ve been (slowly) working on a presentation that explains how property taxes work, as much for my own benefit as for the benefit of others.  But suffice it to say, it’s complicated.  You may see a larger increase than 3%, or your taxes may not change, or may even decrease.  I know that’s an unsatisfying answer, but this is the type of explanation that lends itself more to graphs and charts, not words, so I’ll get that presentation worked out and post it when I do.

Along with the tax levy, we approved the utility rates for 2016.  Water rates, as I’m sure you remember, were increased in the middle of 2015 by $1.00 per 1000 gallons of water (or 1/10 of one cent per gallon) help pay for the water main break repairs (which are now complete, but not paid for).

The other portion of your utility bill, which includes charges for storm sewers, sanitary sewers, and street lights, saw modest increases.  The largest increase was in sanitary sewer rates which went up by $2.50 per quarter, or $10 per year.  This was due to large increases from the Met Council, who charges cities for sewage treatment. Expect these costs to continue to rise, as the Met Council has already announced fairly significant rate increases for the next few years.

The city’s code review task force continues its task of reviewing our city code line by line looking for revisions.  The first batch of changes recommended by the task force will be voted on at the council meeting on December 15 (tonight).  Most of the first round of changes are bookkeeping type changes that either strike unnecessary parts of the code or make the code easier to read.

Important but not glamorous work.

The first part of 2016 looks to be heavily focused on the so-called “Municipal Consent” process for the Blue Line/Bottineau/Whatever-they-are-calling-it-today Light Rail.  There will be several opportunities for Crystal residents to let the council know your thoughts on the plans, as they exist now, for the LRT that would go through Crystal.

As with everything government related, this is a byzantine process that doesn’t exactly mean what you would think it would mean based on the name.  When I have more details about how and when you can share your feedback, I will let you know.

Along with the LRT project process, there is a parallel but mostly unconnected process related to Station Area Planning (see what I was saying about byzantine?).  For this one, Hennepin County hired some consultants to work with the city on developing a plan for the land around the proposed station.

A group of citizens met a few weeks ago at the library to give feedback on the plan.

Because we happen to have a park right next to the station, a lot of focus is on Becker Park, and you may have seen some options for the park in the newspaper.  Just know that everything is really preliminary right now.  There’s a lot left to do, including answering the all important question of who would pay for this stuff.

The consultants will be back in January to present the full plan they came up with (based on our feedback) and then they will leave and we (Crystal) will have to figure out what we’re going to do (if anything) from a zoning and planning standpoint because of LRT.

This is the first chapter in what will be a very long process.

The council is going to continue to work on long range planning.  We had our first meeting about long term goals, and the focus of 2016 will be on getting the fiscal house in order so we can properly plan for future needs.

The council is also looking into whether Crystal can (and if so, should) become debt free.  Believe it or not there are cities out there that don’t use debt, and actually have a cash reserve set aside for emergencies.  Whether or not this is possible for Crystal, and what it would take to get there, are questions that need to be answered.  I look forward to digging into it.

The next council meeting is in about 2 hours.

Photo:  The Crystal Crime Prevention Board presents a check for the proceeds of the first annual Run for ROCCO.  I had other photos from this night but I wanted to use the one that had my lovely wife (the lady in blue that’s not the police officer) in it.  Erin is on the Crime Prevention Board.  Pat Bedell is the board president and is in the middle holding the check.