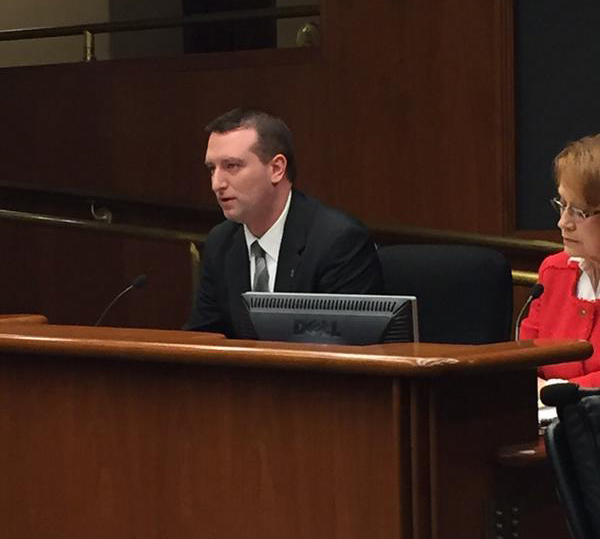 Earlier this year, the Minnesota House of Representatives created a new Subcommittee on Metropolitan Council Accountability and Transparency.

I was honored to be invited to the Capitol today to testify on House Bill 75 (HF75), one of the proposed bills that the committee was hearing.

HF75 would make Met Council plans advisory in nature, meaning that a city or county could not be forced to comply or conform with Met Council projections or guidelines.

I feel that this is an incredibly important reform.  What we have seen in recent years is a Met Council that has been aggressively attempting to expand their purview over decisions that have historically been the domain of local governments.

In all 5 people spoke in favor of the proposed bill, and none spoke in opposition.  In addition to myself, testifiers included Rhonda Sivarajah, chair of the Anoka County Board of Commissioners, Kelli Slavik, Mayor of Plymouth, Mary Giuliani Stephens, Mayor of Woodbury, and an attorney representing Dakota County.

I have pasted below my testimony as prepared.  These were just my notes, so I did go a little off script during the actual testimony.  There were also some questions that the committee asked that are not reflected here.

UPDATE: Audio of the committee hearing is here.  My testimony starts around the 22 minute mark.

Mr. Chair, members of the committee, thank you for the opportunity to speak today. My name is Jeff Kolb, and I am a member of Crystal City Council. Prior to joining the council I served on Crystal’s Planning Commission.

Crystal is a fully developed suburb with a population of about 23,000, located just northwest of Minneapolis (first ring).
I am here in support of HF75 which would make Met Council plans and guidelines advisory in nature.

I believe this is one of the most important proposed reforms that this committee could take up.

I have with me today copies of several letters that were sent to the Met Council by Crystal city officials regarding our concerns.

To date, we have received no meaningful replies from the Met Council to these concerns, only an acknowledgement of receipt of our letters.

Some examples of the issues that Crystal experienced with the Thrive 2040 plan were the initial “projections”- (more like goals) that were prescribed by the Met Council for Crystal.

In a fully developed city with no new land.

For some context, during the years of 2000-2007, Crystal had a net gain of 179 housing units, an average of 22 per year. Those numbers dropped off dramatically during the post 2008 recession. The initial Thrive 2040 projections would have required 107 units per year be added in Crystal, or 5 times the historical rate. The revised projections would require 27.5 units per year, still a rate higher than during the “boom” years.

At the same time, Crystal is “projected” to add 1500 jobs, presumably in the same land that would be used to add housing units.

Clearly there is a disconnect between reality and these projections.
The practical effect on a city like Crystal is that we are required, by law, to create a comprehensive plan.

Our city objects to language in the Met Council’s Thrive 2040 plan that seems to mandate that Crystal amend our comprehensive plan to accommodate these “projections,” including a mandate for density minimums.

There are several other areas throughout the Thrive 2040 plan where the Met Council seems to overstep its statutory authority by attempting to mandate the adoption of certain transportation and streets policies that have historically been, and should remain the purview of local governments.

These encroachments on local government authority are not specific to Thrive 2040, but rather are common place throughout Met Council plans.

I would like to read a brief excerpt from a letter sent to the Met Council in September of 2014 by Crystal City Staff in response to the Council’s Draft Housing Policy Plan.

“As the city discussed in its April 18, 2014 letter regarding Thrive MSP 2040, the city objects to the Council’s treatment of housing as if it were a regional system on par with transportation, sewers, and so forth. For good reason the Land Planning Act does not include housing as a regional system because it is predominately privately-owned, in contrast to the statutory regional systems which are public facilities. The Land Planning Act does not speak of density, only that a city must provide adequate housing to meet the city’s share of existing and projected needs. Crystal is a fully developed community, and its housing is already predominantly affordable when compared with regional averages. The Council is using high density as a proxy for affordability, thus twisting an affordability requirement into a density mandate and exceeding its statutory authority.”

Today there are a number of punitive measures that the Met Council can take against a city that does not comply with their mandated “projections” including denying grant funding or even suing a city to force a change to their comprehensive plan, as has happened in the past.

By passing HF75, you would clarify that Met Council plans are indeed advisory in nature, not binding documents that can be used to infringe on the ability of cities to govern themselves.